Mark Arts has a rich history in Wichita, dating to its inception in 1920 as the Wichita Art Association. It became the Wichita Center for the Arts in 1990 and Mark Arts in 2016. 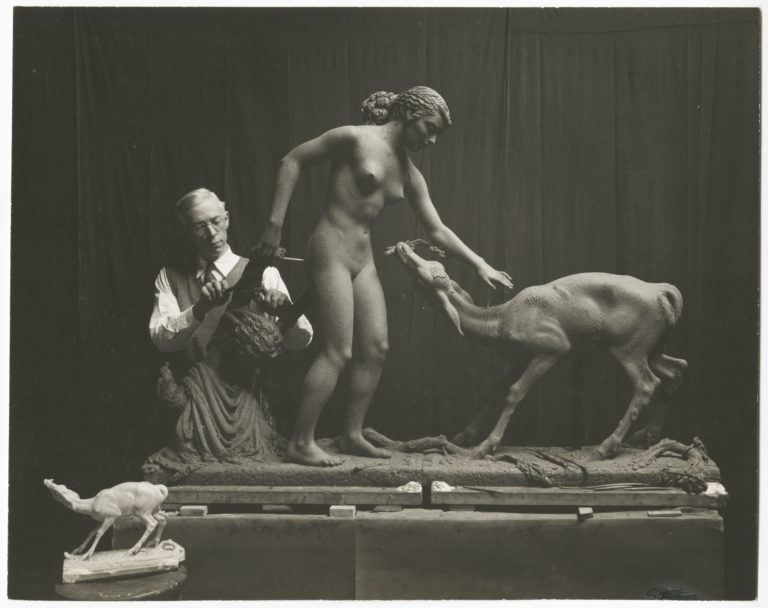 On November 20, 1920, 24 people were gathered for dinner party in the home of Winn E. Holmes, an attorney and the secretary of the Chamber of Commerce. Others in attendance included Mrs. W.O. Mendenhall, Walter A. Vincent, and O. H. Wentcher. At the dinner, conversation turned to art, paintings they had seen in other cities and the need for a permanent art collection and center in Wichita. Shortly after, Mr. Vincent arranged a meeting at the Innes Tea Room to make plans to form an association to establish an art center in Wichita. On Dec 30, 1920, at a banquet at the Lassen Hotel, the group adopted the name Wichita Art Association and approved the first mission statement. The 60-plus members had collected more than $1,000 in fees.

The association’s first exhibition, Paintings by John Noble, was organized December 12, 1920, at the city library. In March 1921, the association acquired Noble’s Toilers of the Sea for $3,500, representing the first item in the collection.

In 1922, the organization began offering art classes, first in the Lassen Hotel and then  in the basement of the public library. Volunteer instructors included Ed Davison, C.A. Seward, Bob Aitchison and Elizabeth Sprague. During this time a Committee of Art in Public Schools was formed, organizing lectures to high school classes and offering prizes for excellence in artistic endeavor.

Interest in art classes continued to grow. The organization rented space in the Butts building at First and Broadway in 1926 and remained there for nine years. In 1928, Clarence Hotvedt took charge of the school and became the first paid teacher.

Two years later, William Dickerson joined the faculty, choosing the Wichita Art Association over an offer to teach at the Chicago Art Institute. In 1932, he married Betty Millard, who also joined the faculty. They wed in secret so that she could keep working because married women were not permitted to work as a
teacher. Bill and Betty Dickerson directed the art school for more than 30 years, cultivating self-expression among their students. Among their most successful students are David Salle, James Gross, Dick Mason, Tom Otterness, Patric Rowley and Oscar Larmer. Their circle of friends included Thomas Hart Benton, John Steuart Curry and Grant Wood.

Salle has always raved about the Dickersons, in particular making glowing remarks about Betty Dickerson in a 1991 Wichita Eagle article: ”I think she was an extremely undervalued asset in Wichita all the years I was growing up. … Of all the teachers I’ve met in my life, she still stands out in my mind as the absolutely
perfect example of what an art teacher should be. She’s simultaneously inspiring, intellectually curious, technically adaptable to any kind of work a student might be trying to accomplish.

Prairie Print Makers
In December 1930, a group of Kansas artists led by Coy Avon Seward formed the influential Prairie Print Makers in the Lindsborg studio of artist Birger Sandzén. Hotvedt was among the founders, and they immediately nominated William Dickerson to join them. Members were encouraged to make prints affordable so the public could buy and enjoy American art. From 1931 to 1965, the Prairie Print Makers commissioned an annual gift print for its members. Mark Arts owns a near-complete collection of these prints, a world-class resource.

Maude Schollenberger
Maude Gowen Schollenberger studied art in New York and Europe after her husband died. Upon returning to Wichita in 1926, she became active in the Wichita Art Association. She was elected president in 1933 and served in that role for 29 years until her death. She was never paid for her position but had an enormous
impact on the association, handling finances, exhibits, lectures and more. She was instrumental in the expansion of the art school, scholarships for schoolchildren, various acquisitions and the launch of the first Decorative Arts and Ceramics Show in 1946. The show was the first of its kind and served as a who’s who in American craft, becoming known widely as the Wichita National. In 1947, Schollenberger launched the children’s theater, tapping Irene Vickers as the director. The theater incorporated in 1948 and put on “Aladdin and His Wonderful Lamp” as its first show at East High School.

Bruce Moore
Nationally renowned sculptor Bruce Moore initiated the organization’s sculpture department, teaching from 1932 to 1934. He was born in Bern, Kansas, in 1905. When he was 12, Moore’s family moved from Pratt to Wichita. In his teens, he took a summer course at the Kansas City Art Institute. His talent was recognized early by members of the Wichita Art Association, who encouraged him. Moore was admitted to the Pennsylvania Academy of the Fine Arts at age 17, the youngest sculpture student there in more than a century. After studying in various European countries, Moore returned to Wichita in 1931. In 1946, the organization commissioned Moore to create the Girl and Fawn sculpture (placed outside the front entrance
to Mark Arts) and the Medal of Honor, given for exceptionally meritorious service. His largest one-man show was organized by Maude Schollenberger in 1962 at the North Belmont location. Moore was also commissioned to create the Beech Memorial Doors, which were installed in 1965 at the new building on East Central.

Formation of the Wichita Art Museum and Relocation to Belmont

The formal opening of the Wichita Art Museum occurred in 1935 and was managed by the Wichita Art Association, which continued to offer art classes. Efforts began after the death of Louise Caldwell Murdock, who bequeathed funds for the city to purchase an art collection with the stipulation that a suitable place be provided to house it. A site adjacent to Sim Park was purchased in 1926 after the approval of a $75,000 bond issue.

Within a few years, the growing Murdock Collection restricted the activities of the Wichita Art Association. Ultimately, the association opted to relocate its art collection and growing art school, and the park commission took charge of the Murdock Collection and operation of the museum building. Twelve public-spirited citizens purchased the property at 401 N. Belmont, and the organization relocated there in 1942. This remained the organization’s headquarters until 1965.

9112 E. Central and Three Visionary Women
Land donated by Mrs. Ralph M. Rounds and continued growth led to the organization’s relocation in 1965 to a new facility in East Wichita at 9112 E. Central. Celebrated sculptor and instructor Bruce Moore installed the commissioned Beech Memorial Doors. Uel Ramey was the architect. The building design shows the
distinct influence of Frank Lloyd Wright, who had initially agreed to design the building but died in 1959.

During the 1960s, three visionary women had a great influence on the organization. Olive Ann Beech, Mary Robinson Koch and Gladys Wiedemann were prominent Wichita philanthropists who supported the organization. Beech, who was named president and chair of the board of Beech Aircraft after her husband’s death in 1950, brought her formidable business acumen. Koch was a true artisan, honing her skills in the organization’s enameling and jewelry classes. Wiedemann’s love for the arts began with her father, a trombonist in the Minneapolis  Orchestra, and she later studied violin and organ.

The Holiday Tables event was launched in 1967, first organized by the Young Patrons of the Arts and later taken on by the Designing Women volunteer group. The following year marked the first Kansas Watercolor Society Invitational, although it was not yet exhibited at the Wichita Center for the Arts until 2001.

A year later, a theater was was added to the East Central facility. Actress Helen Hayes – winner of an Emmy, a Grammy, an Oscar and a Tony – was a guest at the dedication. In 1974, Babs Mellor and James Gross joined the faculty. Both continue to teach at Mark Arts today.

Other milestones in the next several decades:

Becoming Mark Arts and the Construction of the Mary R. Koch Arts Center

The organization was at a crossroads in 2015, finding that the 50-year-old facility needed significant repairs and updating to meet current building standards. Additionally, it was undesirable to interrupt class offerings and lose students during a complete renovation. Ultimately, honorary trustee Liz Koch suggested a
new building at 13th and Rock Road. The Charles Koch Foundation donated the 17 acres, and the Fred and Mary Koch Foundation made a lead gift of $2 million and offered a $4 million challenge grant to the community.

The capital campaign was announced in September 2015, led by co-chairs Mike Michaelis and Bonnie Bing Honeyman. The organization became Mark Arts in June 2016, when ground was broken on the new Mary R. Koch Arts Center. Operations moved to the new building on December 27, 2017. Midnight at Mark Arts, a grand opening celebration, took place on New Year’s Eve, followed by a members-only opening on January 5, 2018, and community open house on January 6, 2018.  Altogether, 216 donors gave $13,259,390 for this project. Mark Arts also contributed $1.1 million from the sale of the East Central building and $1 million from the sale of artwork.

The new Mark Arts campus has created an urban oasis in the city. The gorgeous 40,000-square-foot prairie-style building is an artistic hub that provides opportunities for people to appreciate and create art in an atmosphere of lifelong learning. The project offers nine studios for art instruction, including a culinary arts studio, a digital arts studio and a dedicated youth studio. The arts center also presents a premier gallery space and a great hall for events. The outdoor green space is ample, consisting of a stage for events, two terraces, a sculpture garden and a plein air studio.